Jeff and Jason’s grandparents Harold and Ruth Warrington first purchased Bayside Gardens Mobile Home Park in Clearwater, Florida sometime in the 1950’s. This was the family’s first experience in the Mobile Home Industry. After successfully improving Bayside Trailer Gardens they decided to sell the community. This sale eventually allowed them to purchase Orange Acres in 1964. Back then Orange Acres was the last stop on State Road 72 to Arcadia and I-75 did not exist. Orange Acres was surrounded by pastures, palmettos, and orange groves.

Moe and Shirley purchased two other Mobile Home Parks, Cedar Cove and Crescent Beach in 1981. They decided to sell Crescent Beach several years later and continued to make improvements to Cedar Cove which has 73 homesites.

See What our residents have to say

“We chose to live in Cedar Cove for a number of reasons. A great location, caring management, competitive lot rental rate and excellent amenities. But primarily because of the residents. We have made life-long friends. What more can you ask for.”

"After being snow birders in Cedar Cove for two, years we decided to sell our home up north and purchase a home in Sarasota. We took several months and visited about two dozen parks. We were not able to find one that matched up to Cedar Cove.  The people in Cedar Cove are what convinced us that we wanted to be part of this community.  Cedar Cove is a place where you can enjoy life and make good friends.  There are lots of activities to join into or you can just sit by the pool and relax.  "

"As a resident of Cedar Cove Manufactured Home Community, it is a pleasure to live in such a friendly and caring community. I would recommend Cedar Cove to anyone looking for a piece of “Paradise”.  "

"Our family has lived in Cedar Cove for over 45 years. The Cedar Cove community is very caring and you can be involved as much as you wish. The management works well with the residents and there are always activities to keep your interest if you choose. Friendships are many and it is a place to be happy." 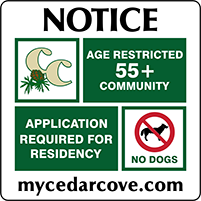 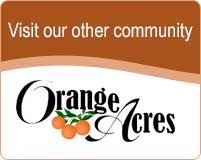